“We wanted a solution that would provide a base throughput of 10 Gbps between our hubs and the ability to expand to 100 Gbps whenever we needed it. We were looking for a provider that understood video over IP. Net Insight was the ideal partner. Net Insight cares about what we put in the pipe not just how the pipe works.” – Adde Granberg, director of technology, CTO, at SVT.
Download Case Study

To overhaul the transport architecture, production workflow and corporate culture behind the broadcaster’s live events content production. The long-term project began in late 2014 with the vision to replace reliance on mobile facilities for outside broadcast with a video over IP network spanning the country and centralizing workflow on one technical hub. The first significant test of the new system was timed for host coverage of the 2019 FIS Alpine World Ski Championships.

In a changing media landscape, live sports and events remain a huge draw across every platform and screen. Broadcasters and content producers are covering more live events than ever. However, tightening production budgets are driving a need for more flexible and efficient alternatives to expensive outside broadcast (OB) operations.

Remote production is the next step change, opening up new ways of working by allowing a production team back at base to have all the resources they need to deliver high quality, captivating content.

The idea of remote production, ‘at-home’ production, or REMI (REMote Integration), in which large parts of the OB functionality is decoupled from the event location to edit and switch back at base, is far from new.

Indeed, SVT had helped pioneer the concept in 2012 when it remote produced select unilateral coverage of the London Olympics. The FIFA World Cup in Brazil 2014 took this to another level when, faced with the sheer geographic spread of the Brazilian venues, host broadcaster HBS transported video back to postproduction suites located at the International Broadcast Centre (IBC) in Rio de Janeiro. Since then, every major sporting event has featured broadcasters that have chosen not to take space at the IBC, instead taking multiple camera feeds and creating the live broadcast back at base.

Practical, large-scale implementations are becoming increasingly common, but SVT’s remote IP production for the broadcast of the FIS Alpine World Ski Championships 2019 in Åre, Sweden, last February broke ground. With the largest number of cameras deployed (80) and the highest volume of remote signals transmitted to date from a live location over IP to a production hub 600 km away in Stockholm.

“The first thing to note is that this was not only about sports but about transforming our entire outside broadcast workflow for live events,” explains Adde Granberg, director of technology, CTO, at SVT. “Our reason to centralise our production facilities was about saving costs and to really focus on making programmes, rather than how to make programmes from a technical perspective.”

“We had four sites in Sweden with technical and studio facilities and the aim was to downscale that to only one with technical facilities, in Stockholm, while retaining studios at each location.The goal was to find technology to help us achieve that technically, and that can help us do so cost – effectively.”

The business benefits are clear. Remote production allows broadcasters or production companies to produce events at their home studios or purpose-built remote production hubs and in doing so save cost, since fewer personnel and less equipment need to travel to the actual event. It also allows the same production crew to handle more productions by having centralised staff and technical resources.

Granberg says, “To achieve this feat for the Alpine World Ski Championships, we knew from the beginning that we’d need more bandwidth, an adaptable workflow and very tight collaboration between vendor equipment with no compromise to our ability to deliver high quality, synchronized images to our rights holders.”

In early 2014 however when SVT brokered the project, the capacity to support so many cameras and reliably transport uncompressed HD signals over IP across such a large distance was unprecedented.

The bedrock of the SVT remote production solution is Net Insight’s Nimbra transport solutions, including the Nimbra 600 series and 1060 Terabit Capacity Platform.

All feeds from Åre were routed over Telia’s IP network to three control rooms at SVT’s Stockholm facility with audio and video arriving in synchronicity to the production studio.

The production employed double 100 Gbps fibre circuits (with one for redundancy). All HD video signals comprising the World feed and Unilateral feeds and Hypercam slomo-cameras compressed in J2K were transported over the network managed by Nimbra in parallel with all IT functions and internet access, return feeds for confidence monitoring and intercom.

The main objective was that any camera including up to uncompressed 80 Grass Valley LDK 86 series HD cameras using Direct IP could be moved to any camera position at any given time, without causing overload or disturbances on the existing live feeds. Each camera is outputting 1.6 Gbps of IP bitrate and the base station the same bitrate in the back direction into the same Ether media. Same Ether media to enable the flexibility to move any camera anywhere and still be able to connect to its fixed remote base station in Stockholm 600 km away. Since two x 80 x 1.6 Gbps is a lot of data to handle, shaping and traffic engineering is crucial, especially as the uncompressed feeds are also mixed with all the other feeds, slomo cams consuming 3x or 6x the bitrate as uncompressed HD, and IT functions over the same 2 x 100 Gbps links.

On-top of this redundancy must work in case of failures.

This was the perfect task for the Nimbra 600 and 1060 series with Arista switches used to increase port density.

“We wanted a solution that would provide a base throughput of 10 Gbps between our hubs and the ability to expand to 100 Gbps whenever we needed it,” says Granberg. “We were looking for a provider that understood video over IP. Net Insight was the ideal partner. Net Insight cares about what we put in the pipe not just how the pipe works.” 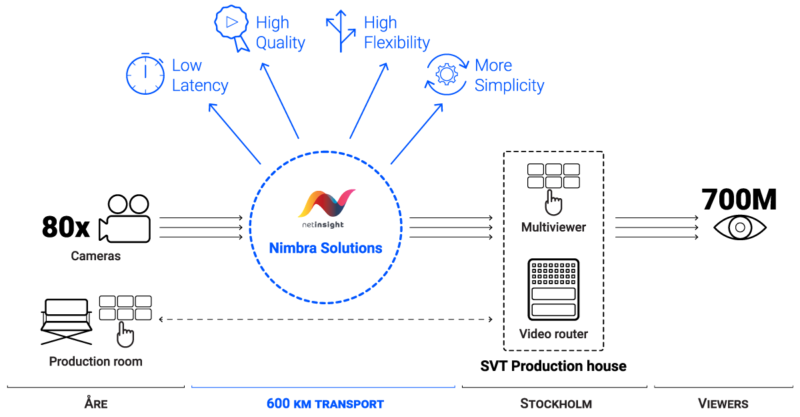 The blueprint for the FIS Alpine World Ski Championships was used by SVT less than a month later for live production of the Östersund 2019 IBU World Championships.

For the biathlon, which took place in the northern parts of Sweden, more than 100 media feeds including return feeds were handled by Nimbra solutions.

“The biathlon was even better,” says Granberg. “We improved a few things to make the system more stabilised and more secure but there’s no doubt everything worked even more smoothly.”

SVT used two Nimbra 1060 terabit Media Switch Routers to shape this traffic which included triple speed and six times speed slow-motion cameras plus all IT data. As with the FIS model, all the feeds were transported from the live location in Östersund to SVT’s HQ in Stockholm.